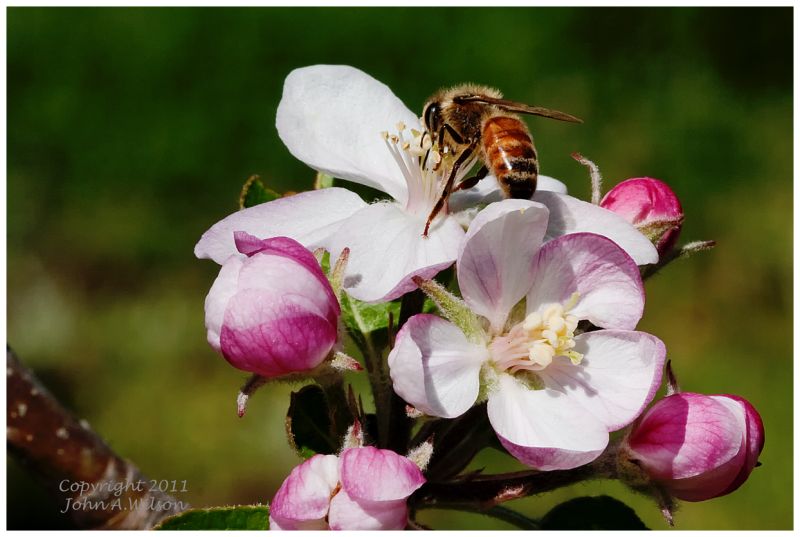 Previous Next
← previous day next day →

This shot was an experiment, a fairly succesful experiment.

I was shooting with a f2.8 100mm macro in a place where a tripod was not practical. I wanted more than 1mm or so of DoF this lens renders when at anything other than a minimal aperture. What to do? Not wanting motion blur while at the same time wanting more DoF?

It occurred to me to crank the aperture down to an f20 for greater DoF and have at least 1/200th to avoid blur. That left ISO as the only variable. So I set the ISO on auto choosing to deal with any resulting noise in the processing.

And this is the result.

JOHN ... yes, I'm shouting my excitement w/this 5***** image. I can't believe that no one else has commented, but perhaps you posted it late.

Nice macro indeed, good tips too! Is that apple blossom?

@Richard: Yes, it is an apple blossom.

John this is great and I was doing the same darn thing this AM myself but probably won't have the same results...I was shooting King Hawthornes (which this appears to be, actually!!) handheld and I tweaked my iso and had it on Aperture priorty for a while and manual on others..just messing around...we'll see..Anyway, this is magnificent sir!!

Beautifully done, very nice detail without too intense a focus.

Love your composition and the pastel coloring on this one and the next.
I've been checking out this little bee series. Lovely job, beautiful macros, of each and everyone.