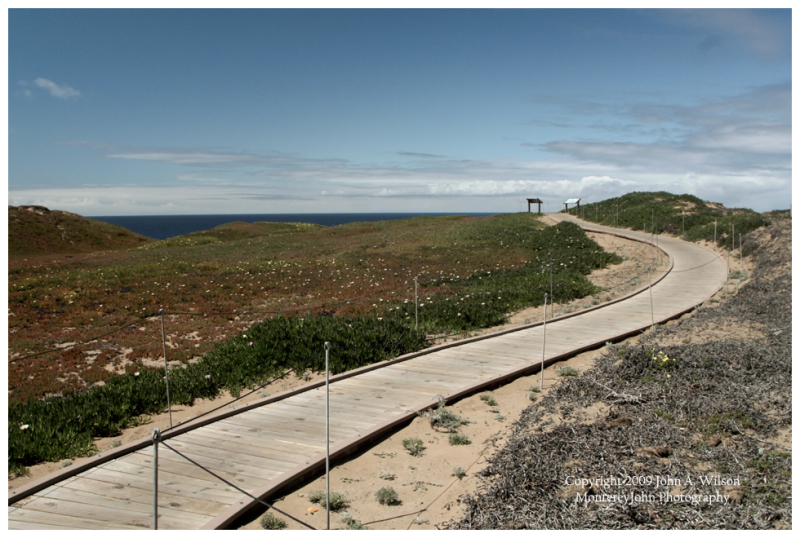 Previous Next
← previous day next day →

On the Dunes at Fort Ord - Monterey Bay, CA

The Ft Ord Dunes State Park is finally open. It occupies in part the site of the now demolished Stillwell Hall, well remembered by vets from WWII to Vietnam as the enlisted men's rec facility at Ft Ord. It succumbed to the erosion of the dunes a few years ago. The park had to go through a Super Fund Environmental cleanup, mostly due to lead from the firing ranges that occupied the shore side of the dunes.

Stillwell Hall was the creation of "Vinegar Joe" Stillwell who built this unique and superb rec facility for enlisted men. It was superior to most any officer's club at the time. It says a lot about "Vinegar Joe" and how he felt about the common soldier.

General Joe Stillwell is a story unto himself and for those so inclined, there is a wealth of information on line about him. Here is a link to the Wikipedia article about him ... well, am3 doesn't like to do two links, so just Google ""Vinegar Joe Stillwell."

I was glad to finally have access to the dunes without having to hike long distances through ankle deep sand up steep dunes.

This image was accidentally shot as a small jpg. I've done what I can to clean it up and make it presentable. (I see a little sensor crud up at the top right ... the heck with it :)

Your image and story are far more important than a little 'sensor crud' that only you see. :D

"Sensor crud" aside, it's a beautiful landscape. I love the deep blue water in the distance and the curve of the walkway! A wonderful narrative and I intend to read the article.

Thank you for the history behind this shot, John. I was sad when Stilwell had to come down, but I'm glad that the park came to be. I like the sweeping curve of the path, leading to the great clouds...

thanks for the info on this place. I like the photo (jpeg or not) - the curving walk leads the eye into the scene and nicely separates the different textures in the image.

You did pretty good with cleaning up the shot.... it looks like an awesome place, and thanks for the info too!!!

Great story and photo, love the curves of the pathway.

Interesting story and excellent photo. I like the curving path.

John, this is a nice shot, small jpg and all. But where have you been? Hope all's well and that you had a good Easter.
;-)

It seems like a beautiful place. I'm thinking the men that were stationed there were probably pretty pleased with their conditions, at least as far as their beautiful surroundings were concerned.

To me it looks great! Beautiful place, interesting story behind this image. Thank you for sharing! :)